Poking around Reddit, I found a post asking if someone could explain the concept of heightening. This is one of those terms that gets thrown around a lot but it’s difficult to define.

Here’s a great example from a 1993 episode of SNL: watch this, assuming Lorne’s copyright monkeys haven’t stricken it yet. If the video is down, here’s a transcript. I’ll wait. 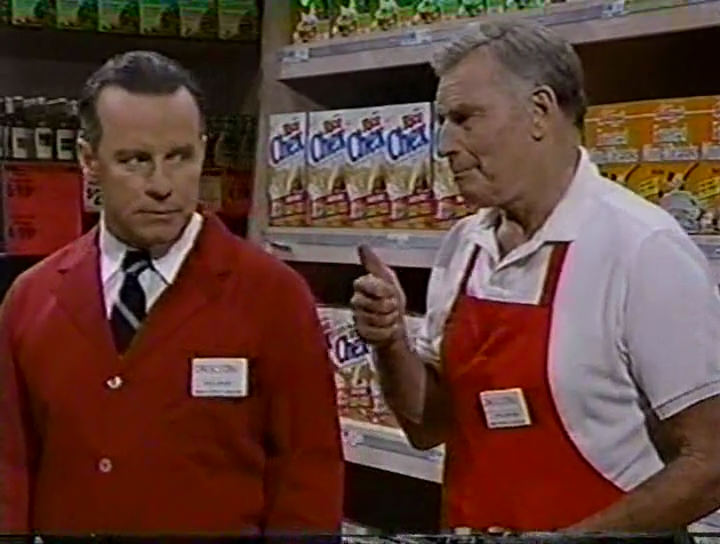 If you want to analyze this scene with the UCB style, let’s start with the base reality. Because this is TV, it’s easy to convey: you’ve got an old man working a low-level job at a supermarket.

How do we heighten this? You want to give Bag Boy multiple opportunities to take higher status. The violations of his job must get larger and larger. This scene does that beautifully. Let’s chart each interaction…

Customer 1: Melanie Hutsell, who wants to know if the apples are fresh.
Violation: Bag Boy tells her to steal them.

Employee on Loudspeaker 1: Price check on a 6 oz. can of peaches.
Violation: Bag Boy gives an incorrect price and says they’re $3.89.

Manager Interaction 1: Phil Hartman tells Bag Boy that the peaches are 69 cents. (This affirms the price check violation.) Hartman supplies further base reality by explaining that Bag Boy has worked at the supermarket for 42 years. The manager suggests he might fire Bag Boy.
Violation: Bag Boy casually mentions a story he read about a man who got fired and came back to kill his boss. That’s a significant jump in status. Can the scene continue heightening or have they gone too far?

Customer 2: Julia Sweeney and her “son” say hello.
Violation: Without prompting, Bag Boy rips open a box of cereal, hands the kid a toy, and dumps the cereal on the floor. See how this is a more aggressive high-status move than suggesting a woman pocket a few apples?

Employee on Loudspeaker 2: Price check on a head of lettuce.
Violation: Bag Boy says they’re $16. That’s a more outrageous price than the one he gave for peaches.

Manager Interaction 2: Hartman is even angrier about the wrong price.
Violation: Bag Boy passive-aggressively suggests he’ll murder Hartman with a shovel. It’s a more direct threat than the first.

Customer(s) 3: Adam Sandler and David Spade show up to talk trash to Bag Boy. How will he react? We already know he goes high status. But this is the most openly hostile threat he’s faced.
Violation: Bag Boy tells a “joke” about chopping off Sandler’s and Spade’s heads, complete with the finger motion across their necks. 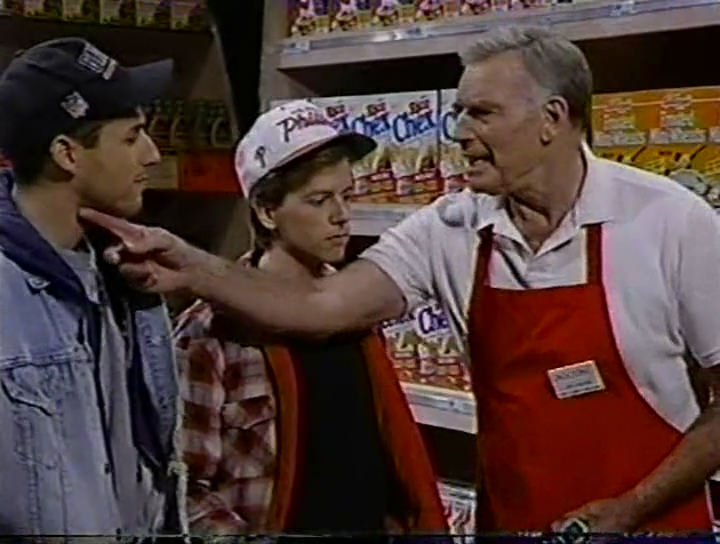 Seems like we’re tapped out, right? How do you heighten from there? Increase the stakes, increase the violation.

Employee on Loudspeaker 3: Eggs have been spilled in Aisle 3.
Violation: Bag Boy blows it off. It’s the most nakedly aggressive high-status move yet. A flagrant disregard of his position.

Manager Interaction 3: Hartman, fed up, suggests that Bag Boy should retire.
Violation: Bag Boy launches into a hypothetical description of what he’d do with his free time. And this is gold.

“There’s another hobby I was thinking of taking up, but, only if I had enough time on my hands. You know, the funny thing is, this one involves you. Yeah, yeah. I was gonna see how loud I could get you to scream, but… not by using the pliers on you, but on the ones you love the best. Ohhh, I’ll bet we can get it so the screams echo off the walls of that remote tool shed for years!“

Dear God. That’s how you heighten a threat of murder. You threaten torture. And not against a person directly, but against their loved ones. It’s insane. It’s brilliant. It’s beyond any measure of good taste. And that’s how you know we’ve heightened to the maximum. The scene must end. And so it does. Hartman backs down.

Employee on Loudspeaker 4: One final price check. A 12-pound honey-glazed ham.
Violation: “Two for a nickel.” It’s one more final crazy price, and the sketch ends.

If we were witnessing this in an improv show, I would hope the team would edit right after Bag Boy threatens his boss with the torture of his loved ones. That’s about as far as you can heighten this idea. A TV sketch show can’t end there, but an improv show (or scene) definitely can.

What’s lovely about this scene is that it juggles three different ways to prove out Bag Boy’s status. The price checks alone would be a boring scene. The customers alone could be interesting, but it would get repetitive. The boss vs. employee scene could also become boring. As soon as Bag Boy proves his status, we cycle to the next interaction. This keeps the scene from getting stagnant. It’s not an endless tag run of customers. It changes but still maintains a pattern.

When you think about heightening, I find it’s helpful to think about making things worse. Imagine a date at a picnic. If the date goes well, that’s probably not interesting. If bad things happen, we’ll be interested. The key to heightening is to start relatively small and give yourself room to grow. So if we’re at a picnic, the first bad thing could be that the guy forgot to bring utensils. It’s a clear problem, an unusual thing, and it suggests the direction to go forward. What’s worse than forgetting cutlery? That’s your next discovery. Maybe the guy made peanut butter and jelly sandwiches, but the girl has a peanut allergy. What’s worse than that? There’s your next move.

Remember that heightening is not hitting the exact same thing over and over again. Bag Boy doesn’t tell each customer to steal a larger and larger thing. If you’re doing that, you’re focusing too narrowly on the unusual thing. Step back. If we watched the picnic scene and the guy forgot cutlery, then explains he forgot food, it’s too close to the original unusual thing. Step back. “Things are going wrong at the picnic.” Those things should be bigger and bigger until they can’t get any bigger. And they need to be different enough that we’re not hitting the exact same note. Where does the picnic scene end?

You could also think of a heightening scene like the NBA dunk contest. In the first round, you need safe enough scores to move on, but you also need to top your competitors. The game is dunking in more and more unusual ways. By the end of the contest, you’ve got people dunking blindfolded and jumping over teammates and leaping cars. You wouldn’t start the contest with your craziest stunt because there’s nowhere to go but down. So start your scene with a nice safe dunk, then top it. Take the idea of that first unusual thing and push it to its extreme. Then pray that your teammates edit when you’re out of gas. 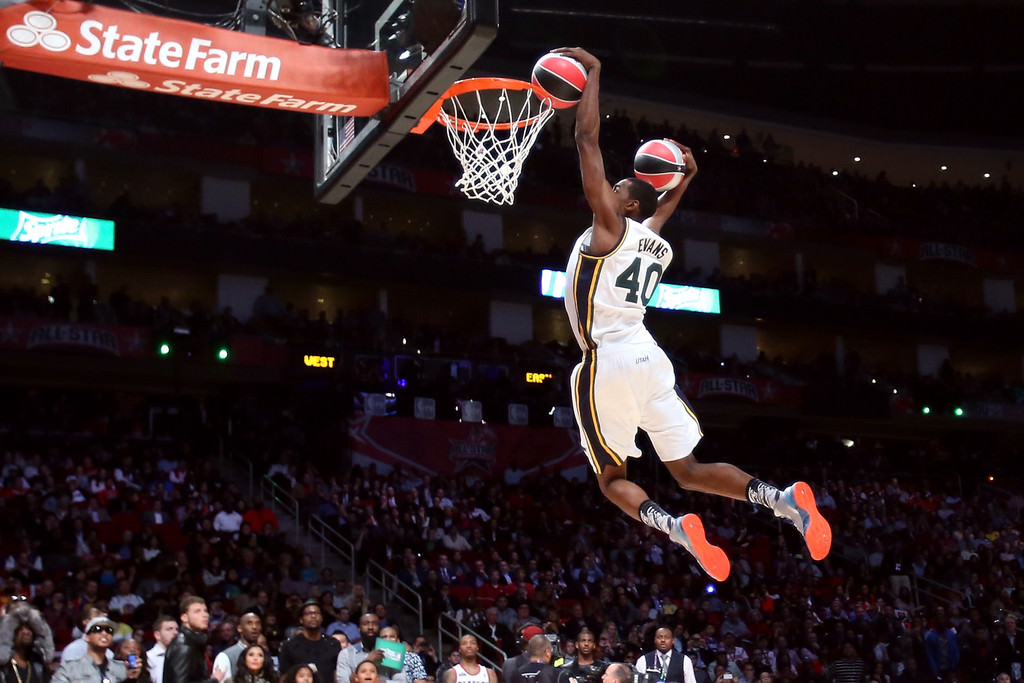 One response to “What is Heightening?”